In 1977, the vision to build a house for Yahvah originated in the heart of Dr. Washington, while attending the church of his spiritual birth. Yahvah instructed him by his Spirit to leave that assembly and prepare for His mission.

In January of 1978, the ministry started with Pastor Washington, his wife and children in their Inglewood, California home. Wonderful messages were taught during those Friday night bible classes. Visitors came to hear the Word of Yahvah. Those messages continued weekly until Yahvah directed Pastor Washington to go now and look for a building.

On July 14, 1978, after much preparation, Christian's Community Church opened its doors at 8223 South Western Avenue in Los Angeles, California That Friday Night Bible Study was attended by only Pastor Washington and his family. This ministry was founded on the Word of Yahvah, as Yahvah spoke to Pastor Washington that "My people are destroyed for the lack of knowledge." Thus began the Word Ministry of Christian’s Community Center Church; and as Pastor Washington committed his way to Yahvah, he received much revelation knowledge. 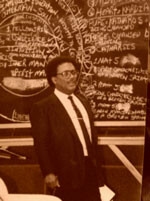 Yahvah blessed this ministry tremendously. In July 1979, the Spirit of Yahvah led Pastor Washington to the northwest corner of Western Avenue and 83rd Street, and told him he would give him that corner building at 8227 South Western Avenue. In August 1979, Christian's Community Center moved into its new location at this address. 1980 to 1981 were truly blessed years. The church continued to grow by leaps and bounds and Pastor Washington was soon looking for a larger location.

In August 1981, a location at 8725 South Broadway was discovered. The building was purchased and needed work was begun to make it fit for service. Today Christian's Community Center stands on Broadway representing the epitome of a church that is unwavering in the teaching of the Word of Yahvah and being completely led by the Holy Ghost.

Sunday School for All Ages