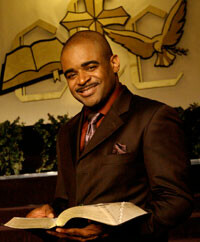 Pastor Thom E. Washington was born on October 26, 1967 in Los Angeles, California. As early as he could remember he has been in church.  His father, Dr. Will T. Washington, and his mother, Sis. Yvonne Washington, were saved in 1969 under the Pentecostal Assemblies of the World (P.A.W.).   He was baptized and filled with the Holy Ghost at Mt. Zion Apostolic Church at the early age of 8 years old.  This background gave him the foundation that would serve as a spiritual birthmark upon his life.

As his family served in church, Thom became enamored with the music that the church offered.  At the age of five, his mother saw this when she signed up for piano lessons for herself; but then was told by her teacher that her son showed “promise”.  During this time the family could only afford lessons for one, so Sis. Washington sacrificed her desire, and elected to send her son.  This exposure released a flood gate of musical genius that allowed Thom to become proficient not only in piano, but also in clarinet, oboe, bassoon, French horn and trombone.  Thom received many awards and accolades throughout his participation in the Los Angeles Unified School District Music venues.  The “gifts” had been stirred, and now a platform was needed to use them for YHVH (God).

As a young minister, Dr. Washington would go to church early and take his son with him, as he prepared to get ready for morning worship.  For a few moments the two would have a small praise service.  Dr. Washington would sing and Thom would play.  In 1979, when Dr. Washington was called to pastor Christian’s Community Center, Thom served in any capacity he was needed.  He served on the ushers’ board, sang as a tenor in the choir, and even performed janitorial duties every Saturday night in preparation for Sunday Service.   Shortly after the church moved to Broadway, the minister of music, at that time, left the church.  YHVH (God) had already prepared Thom to fill the void.   Many felt Thom was not ready for this challenge at 15 years old, but miraculously, the anointing began to move upon him.  He began playing songs by ear; and his talents increased weekly from 10 fold to 1000 fold.  Thom became the primary pianist for CCC's Choir and before long, the Minister of Music.  The choir grew so large and had such an anointing, that Thom was moved by the Holy Spirit to add “Cathedral” to its name.

CCC's Cathedral Choir, has ministered all over the Southern California Region and has garnered two awards in the McDonalds’ Gospel Fest competitions.  In 2008, the Cathedral Choir won the Verizon How Sweet The Sound Title of “Best Small Choir in Southern California."  For the past two consecutive years, the Cathedral Choir has been featured on KCET/PBS televised Holiday Celebration, where it was allowed to give a moving tribute to the world in honor of the choir’s original founder, Sis. Yvonne Washington.  The choir is currently appearing on NBC Channel 4 news as Fred Roggins Weather Choir, where they sing the forecasts on a regular basis.  This choir has been an asset for almost thirty years; not only to the church where it resides, but also to the surrounding community and the Kingdom of YHVH (God).  Pastor Thom has also led One Voice” Praise Team for the past four years. Under his leadership, One Voice has recorded three anointed and highly successful CDs:the “Elements of Praise” series. “Elements of Praise” has been phenomenally effective in spreading the name of “Yeshua” through the medium of music.  One Voice is currently working on the soon to be released “Elements of Praise Anthology."  The best from Vol 1 and Vol 2, with several newly recorded selections, will give glory to YHVH (God) and be used as an instrument to further YHVH (God)'s kingdom.

In addition to working in the music ministry, Thom served in the office of Youth Leader from 1986-1989.  This Youth organization, under his direction, was very successful; it was then that Thom discovered his burden for young people.  Being saved at an early age, Thom knew firsthand the need to support youth embattled by the influences of the world.  This youth group provided programs which gave that spiritual shelter for youth.  In 1989, Thom pursued his career and was forced to resign his position as CCC's Youth Leader.  But his heart was always with the youth, and he assisted wherever he was needed.  In 1996, he married his soul mate, Stephanie Henderson.  Stephanie, a virtuous woman of YHVH (God), heads the finance department and sits on the board of CCCLF. She and Pastor Thom work side by side in TYC.  In 2006, Pastor Thom and Stephanie were blessed with a beautiful daughter Kennedi.    Even at a young age, Kennedi Vella is already beginning to display spiritual gifts.

Thom’s gift in the Pastoral Ministry took off during a TYC Retreat when he spoke about Praise and Worship.  Out of this retreat came an eye opening revelation, packaged under the title, "Music 360." The message that YHVH (God) gave him was so powerful, that there was no question that YHVH (God) had something more for Thom to do. Music 360 has been presented throughout the nation at several of our churches, and it exposes tactics that Satan uses through worldly music.  After this experience, he led of the Holy Ghost to elevate to the next level of ministry.

In 2007 he was installed as Youth Pastor for CCC of Los Angeles. His anointing continued to expand, operating in the youth arena as well as the general congregation.  Pastor Thom presided over Youth Take Over Sundays where he also shared the word of YHVH (God).  His anointed messages were so phenomenal that he was asked to minister every fourth Sunday as well.  He has successfully tackled several series of study: Love, Faith, Unity, and Spiritual Excellence, to name a few.  His current subject is “Balanced Prosperity”.  For the past three years since the inception (or manifestation) of his calling, Youth Pastor Thom Washington along with Bishop Dr. Will T. Washington have become the “Dynamic Duo.”  This father and son team anointed by YHVH (God), is catapulting the Los Angeles Ministry to a whole other level.  The installation of Pastor Thom from Youth Pastor to full Pastor is a natural progression that can only lead to more proliferation of the goals and vision of this ministry.  Pastor Thom has grabbed hold to the vision that was written and YHVH (God) has anointed him to run with it.

Sunday School for All Ages